Hands on with GTA V on PC: the "ultimate" port(updated with the goes live times for USA&UK addedAU)

The game has been rinsed: every car, every mission, every location, every little detail has been examined and dissected at length on YouTube, on forums, and on sites all over the web.

All that’s left to say is this: Rockstar repeatedly call the PC version the “ultimate” or “definitive” version of the game.

And after playing it on a truly monstrous PC – an i7 with 16 Gb RAM running dual GeForce 980s, driving a 4K monitor at 60 frames-per-second, I think they’ve got a point.
There’s a line within the demonstration that Rockstar keep pressing: that the PC version is the most “configurable” version of the game. The trick, and something they’ve realised, is that PC gamers are not all alike: that we like playing in different ways.

So: imported and refined from the current generation of consoles is a set of menus to determine what controls and viewpoints you use at any point of the game. If you’re on foot, do you want to default to be in first-person camera, and use the mouse and keyboard? If you’re in a car, where do you want to place the camera, and how would you like the joypad sensitivity? It’s strange, to be genuinely excited by options screens, but Rockstar’s approach really is quite the thing: give players, not just a city to explore, but a choice in how they view it.
It’s a microcosm of their approach to the PC build, which, at launch, will include everything released thus far for the consoles, including the multiplayer, GTA Online and the online heists. But there’s more: the port has been put together by Rockstar Toronto: the same team who worked on the widely praised PC version of Max Payne 3, and their attention to detail is remarkable. The game supports multi-monitors out of the gate: up to three running at any one time. If you’re using an Nvidia card, those monitors can be displaying in 3D. A new radio station has been added that will import your local music and insert DJ stings and adverts, or you can just play your tracks sequentially.

The port is equally flexible when it comes to system requirements - bending to fit relatively low minimum and recommended specs.
“We wanted people with older or less powerful hardware to still be able to play V, rather than requiring the latest greatest hardware,” a team of senior staff from Rockstar North told us - director of technology Phil Hooker, director of engineering Klaas Schilstra and technical director Adam Fowler.

Machines at minimum spec are expected to handle GTA V at 800x600 and 20 to 30 frames-per-second - while recommended spec systems should manage 1080p and meet 60fps on medium settings.

Taking advantage of the 4K support will be a different matter: you’ll need an AMD HD 7870 or NVidia GTX 760 with 2GB of VRAM, at least, to reach 30fps - and a high-end SLI or Crossfire setup to top 60fps.
GTA IV eventually hit 4K thanks to the unending efforts of its mod community. Asked whether there were any measures in place that would prevent GTA V players from producing similar kinds of mods, Rockstar said they were determined to “preserve the integrity of the GTA Online experience”.

“We will be working to prevent anything that detracts from that experience or has a negative impact on the community of players overall,” they said. “But we are excited for PC players to get their hands on the game and experience it for themselves.
Elsewhere, the port introduces a new (and alarmingly comprehensive) video editor, the Rockstar Editor, that takes 30 second excerpts of your footage (longer videos can be created by stringing together consecutive clips). You can reposition the camera and apply instagram filters, do slow motion effects, and export the results to YouTube. Or, you can create your own machinima shorts in a director’s mode that gives you permission to stage scenes using any characters or animals from the game.

You will need to sign up to the Rockstar Social Club app to install and activate the game, and the game will periodically check in with the service for verification - but it’s “not an always-on system”. And crucially, we’ll get future updates alongside the consoles, rather than on a separate timetable. Now that we’ve got GTA V, we’ve got it.

Speaking of which - why has it taken a year and a half for the game to finally land on PC?
“The simple answer is bandwidth of the team involved,” said Rockstar. “We wanted to make each version the best possible game we could make, so we have kept the core GTA team on the game from version to version and we have given each 100% focus and attention, while adding new features to each version and constantly adding to and improving GTA Online.”

Only once Rockstar had pushed the limits of what they could do on the PS3 and Xbox 360 did they turn to new generation consoles and the PC, which share similar architecture. The best PC developers across Rockstar’s studios pitched in - people who’d worked to port Max Payne 3, LA Noire and GTA IV.

“Choosing to do things this way takes additional time but we think the results are worth it,” said Rockstar. “The PC game builds on each prior version, giving PC players the ultimate version of the game.” 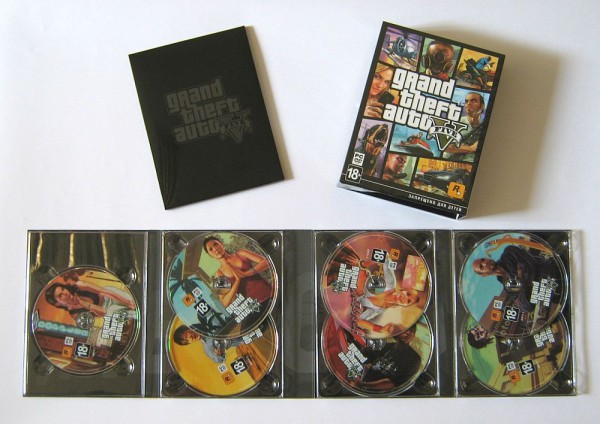 At least that’s according to an image of the package taken out of Russia – at least we think that’s Russian language on the cover (thanks,Reddit ).

There’s another image which was posted on Twitter showing stacks of the PC game, and it looks rather thick so, we can assume the seven-disc image above will be standard for most regions if it is indeed legitimate. We don’t have one in our hand so we can’t confirm it. 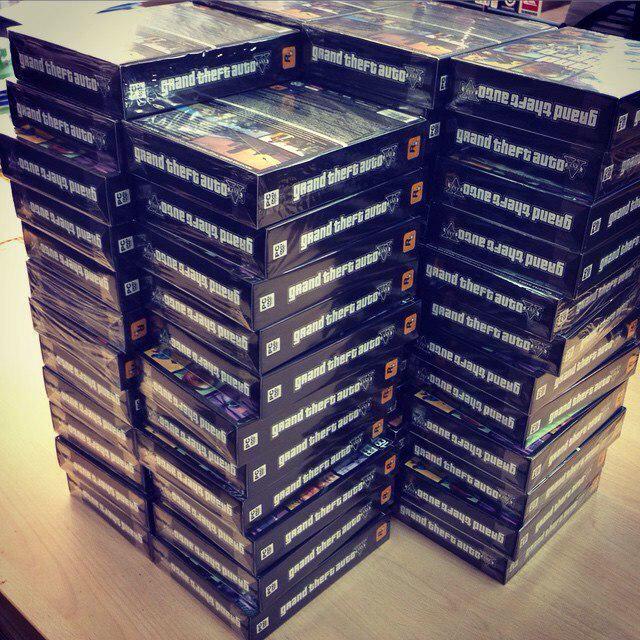 The PC version of the game is 65GB, and is ready to be pre-downloaded through Steam and Rockstar Warehouse in preparation for launch on April 14

GTA 5: Rockstar plans to “deliver updates to PC and consoles simultaneously”
By Stephany Nunneley-VG-247
Those worried that GTA 5 DLC or updates on PC will arrive later than consoles needn’t be concerned, according to Rockstar.
Speaking with Gamespot, lead gameplay designer John Macpherson said the team plans to release updates simultaneously.

“We plan to deliver updates to PC and consoles simultaneously,” he said. “There can be occasional variations in timing based on specifics from one console to another but PC will not be on a separate timetable to other platforms.”

That should come as good news to those picking up the PC version on April 14, especially considering the PC version is releasing well after the console versions.

When asked why GTA games for PC always launch after the console versions, Macpherson explained that in this case, creating last and current-gen versions of the game alongside PC took some time.

“It comes down to bandwidth. We want each version of the game to be the best it can possibly be, and that means having the core members of the original GTA 5 team working closely with the best PC developers from across all Rockstar studios,” he said.

“The same crew that did great work on the PC versions of Max Payne 3, L.A. Noire and GTA 4, essentially. A large portion of the team that worked on GTA 5 for PS3 and Xbox 360 also worked on the PS4 and Xbox One versions and all of the GTA Online content, including Heists.

“Since the new generation console versions and the PC version share similar architecture, the team also continued to work on the PC version. With each version adding features and requiring the focus of the same key people, that takes time.”

Macpherson went on to say the PC version of GTA 5 benefited from the “huge pool of knowledge” at Rockstar Studios and the teams are excited for people to play this version as it’s “the ultimate version of an amazing game. 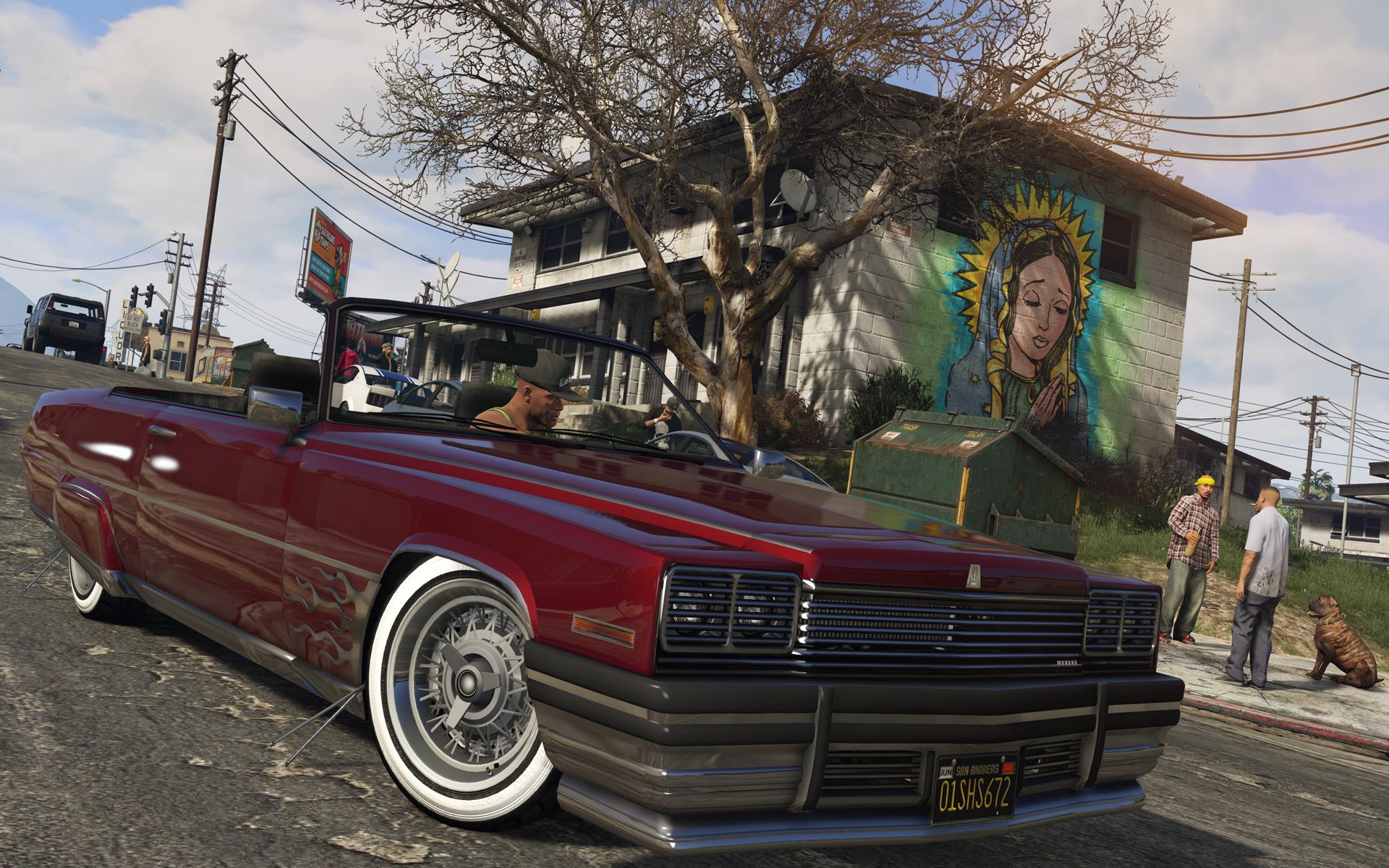 By Sherif Saed-VG247
GTA 5′s ‘Director Mode’ is everything you wanted GTA 4′s editor to be
If you thought the video editor in the PC version of GTA 5 is all there is to it, think again.
Rockstar has revealed what it’s calling ‘Director Mode’ for GTA 5's video editor. The new feature allows anyone to use any of the game’s characters -or animals, and have them speak or perform actions, which is invaluable for anyone looking to make films using the editor.

Speaking to PCGamer, lead designer John Macpherson said that the video editor has received “significant improvements” over the one found in GTA 4.

“This starts at the recording level, where players now have the option to start and stop their captures at will. We have also added a brand new feature known as ‘Director Mode’. This gives users the ability to play and record using any actor from GTA V such as story and heist crew characters, members of the ambient population and even animals,” he said.

Not only that, but the new mode will let users change the time of day, weather, as well as utilise some cheats to gain further control over the environment when capturing scenes.

“On the editing side of things, GTA V now allows players to add and trim multiple radio tracks to a single video,” added Macpherson.

“Scored music is also available as are numerous in-game commercial recordings. A new suite of custom filters have been added along with custom post effects tuning. Players can add and customize depth of field effects in their videos now as well. For camera edits, additional targeting and blend options have been added for greater control over shots. Final edits can now be shared directly to YouTube and entered into upcoming Social Club contests.”

I cannot wait to see what the community does with these new tools.

This is what time GTA 5 on PC will go live in Europe and North America
By Stephany Nunneley-VG247
Those picking up a physical copy of GTA 5 on PC, or those who have pre-downloaded it, may wish to know when the game will go live. Rockstar has you covered.


Starting April 14, those in the UK will notice their pre-download unlock at 12am.

Those in the US can start playing Monday, April 13 at 4pm PDT/7pm EDT.

These times are via the Rockstar Support Twitter account, except the Australian times, which were provided by Rockstar's Australian office.

Everyone join up with the AntiFun Goons Crew if you plan on playing GTA V online.